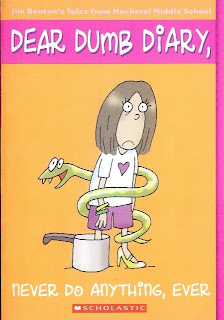 What is the book called? Dear Dumb Diary

Who is the author? Jim Benton

Who is the illustrator? Jim Benton

Who is the publisher? Scholastic

What is this story about? Its about Jamie Kelly its her diary. And its about where Angeline, her enemy, raises some money for charity. Then her friend Isabella goes crazy and buys contact lenses and now is probably blind. The was a jumprope-a-thon coming up to raise money for charity, so they did the jumprope-a-thon but Jamie and Isabella had to sit down and count how many skips everybody did, then they had to have their turn last. It was Angelines turn. Jamie always talks about how Angeline is so stupid, how she hates her, and then Angeline said I need to speak in private before my go and then she tells Jamie she cant jump rope. Jamie is just really happy that she is better than Angeline at something.

Who are the main characters? Jamie, Angeline and Isabella. 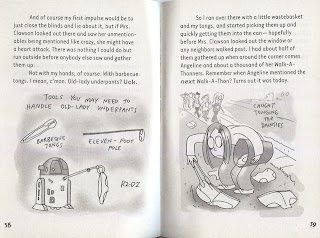 What problems or challenges do these characters face? Jamie faces a problem where she tries to raise more money than Angeline. Jamie was having a garage sale and Angeline walked past in the walkathon and saw all her stuff like the duck tshirt with big splotches of pudding on it, so she was really embarrassed.

What is the climax of the story, when things get the most problematic or exciting? When they both raise money against each other and they try to raise the most money. I thought the bit where Isabella bought contact lenses using all the money they had raised was really funny.

Were there any shocks, twists, turns or surprises? What were they? Well, there was a shock when Angeline said that she couldnt jump rope and that she could only jump rope if someone was holding the rope for her.

Can you describe the illustrations? They are good; theyre not that detailed but theyre really really good. I really like them. And there are funny illustrations of Angeline, funny stuff like the times when Isabella yells. Theyre in a plain style but more cartoon. They have writing to go with the pictures and sometimes charts like when Jamie has an angry face, then an angrier face, then an angrier face.

What do you like about the illustrations? I like that theyre just simple and theyre neat, theyre not all scribbly. Im used to cartoons and when they have cartoons, it actually makes it more funny. I also like when Isabella colours in her contact lenses while theyre in her eyes. 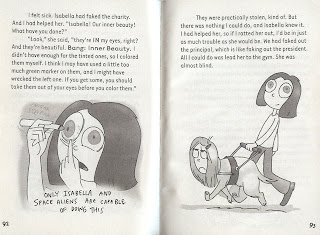 Is there anything you didnt like about this book? No.

Did you learn anything new from this story? I learned to not colour in your contact lenses in your eyes, especially when youre wearing them. Or not to wear them when youre eight years old.
Tweet Like Post Plus