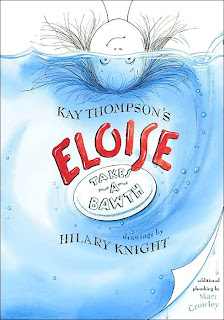 What is this story about? The manager of Eloises hotel the Plaza is coming to talk to her nanny about what to do for the Venetian Masked Ball.

Eloise has to have a bath. Eloise has a bath and she filled it and she filled it until there was a whole flood in her room, then all the people from the hotel realised that the hotel had sprung a leak. All the engineers in the hotel searched for the leak but they couldnt find it, and so Eloise nanny opened the door and out sprang lots of water. Eloise flooded the whole Venetian Masked Ball.
Who are the main characters? Eloise, the nanny, the manager of the Plaza hotel.

What problems or challenges do these characters face? Eloise she doesnt really have to face anything because shes just having fun in the bath and imagining shes at sea. The nanny is pretty much having a problem because she is trying to get Eloise out of the bath because the manager is coming. The manager had a problem as well because he needed to fix the hotel because Eloise was at the top of the hotel and it flooded the whole hotel down.

What is the climax of the story? At the Venetian Ball when it is all flooded but it actually looks beautiful its like a water Venetian Ball. And it was actually looked more like Venice then. The other exciting part would probably be when Eloise was in the bath and when the hotel got flooded when she opened the door.

Were there any shocks, twists, turns or surprises? What were they? Yeah, there was a surprise when I first read this book and when they opened the doors up at the end and there it was the big Venetian Ball all flooded and I thought It was really really amazing, like people had to swim to get their tables. The tables were still above water. There were Eloises dancing everywhere.

Can you describe the illustrations? Her hair isnt really like all just coloured in. Theyre really just like lines sticking out maybe just 15 lines sticking out. And then she has a little shirt and then a dress with things that go over her shoulders to hold her dress up. And a bow in her hair. The illustrations are shaded a little bit. The unusual thing about them is that when theyre shaded, they are like crosshatch they go up and down with the pencil, they dont colour in every white bit when they shade. They use lots of other different techniques, like using white chalk for the managers pants and stuff. They dont have that much colour, its normally just white, blue black, red and pink. They look pretty old fashioned.

What was your favourite part in this book? I like when Eloise gets ready she turns on the taps and peeks out at the kitchens before she takes a bath and fills it really high and says It has to be at the brim before going in and then she imagines about going to sea with her pet tortoise and dog. The Venetian Ball bit once I get to that page, I just study over it and look at it and see all the amazing illustrations, but with the Venetian Ball they use all the colours at once.

Is there anything you didnt like about this book? No, not really. They speak in an old fashioned way Oh nanny dear, its not my fault. After all, Im only six and Ive been at sea for three weeks.

Did you learn anything new from this story? Yes, I learned not to fill the bath up too high!

What other books do you love? I like the bad dog books - Marley a Dog Like No Other theyre chapter books.
- this review by Ella (8)

What is the book called? Eloise Takes a Bawth

Who is the author? Kay Thompson

Who is the illustrator? Hilary Knight

Who is the publisher? Simon & Schuster