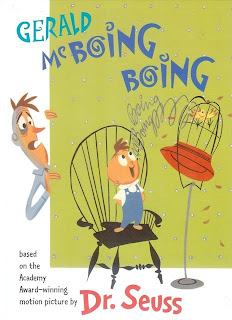 This beautiful book, perhaps one of Dr Seuss's lesser-known creations, is actually based on a cartoon from the early 1950s a cartoon commissioned by animation studio United Productions of America. The movie went on to develop a huge following in the States, even winning an Academy Award in 1951.Perhaps the reason the book is lesser known is because it was only released briefly in the early '50s, to coincide with the movie release.

The book was re-released in 1978 and again in 2001, bringing this fun story to several new generations of Seuss fans.

The adorable Gerald is a little boy who uses sounds instead of words boing, gong, clang, cuckoo and honk with fun results. Who knew a little onomatopoeia could bring a young man such success?

The luscious illustrations in this retro-style book will delight both adults and kids bright, festive and deliciously 1950s this is a book that can be treasured well into the 2050s.